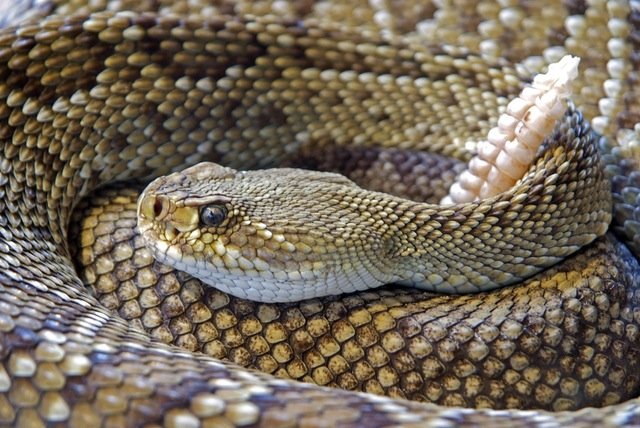 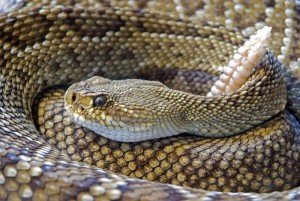 Did you know that baby rattlesnakes don’t have rattles and adult rattles can break off?

The Rattlesnake is the most famous of Arizona’s deadly snakes and their name comes from the specialized rattle at the end of their tail – which they shake as a warning signal. But not always!  Rattlesnakes are just one of the many hazards dogs encounter in the desert – either in their own backyard or while on a walk with their owners.

One preventative measure is a vaccine for rattlesnake bites available at animal hospitals. It is made of snake venom.  If your dog is bitten, the reaction to the bite is reduced and may even be delayed, but it is not completely eliminated.  The dog would still need medical attention as soon as possible if bitten.  But overall, it may be easier on the wallet to spend a few dollars every 6 months for a vaccination, than spend several thousand dollars if your dog is bitten, needing anti-venom.

Anther preemptive action to take is rattlesnake avoidance training. As a pet sitter, I strongly recommend rattlesnake avoidance training to all my clients who have dogs.  While it may be hard to watch the dog go through the training, which includes a strong shock from a shock collar when they approach a snake, the alternative is much worse.  The snakes used in training are defanged and without venom.  The Human Society of Southern Arizona offers Snakebite Avoidance classes regularly.

I have witnessed first hand how well training works. I had my dogs undergo snake avoidance training.  They were trained on the smell of a snake, the sound (rattle) of a snake and the sight of a snake for times when snakes are present but not rattling.   A few years later, their training was put to the test when they would not come into the house during a nighttime bathroom break.  Lying on a patio step was a rattlesnake.  The dogs could smell it and knew to stay away.  They were my heroes!! 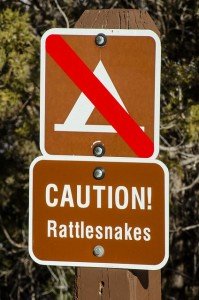 The best way to avoid being bitten is to not get close to snakes. Easier said than done, right?  Usually snakes bite to defend themselves.  They really are afraid and will usually slither away when they detect people.

From a coiled position, snakes can strike at a distance of about half to two-thirds its body length, so you don’t want to get too close. But sometimes we and/or our dogs don’t see them until we happen upon them unexpectedly.   As mentioned, rattlesnakes, even those with tails, don’t always warn a person or dog that they are close by, and some may immediately strike if feeling threatened.

So how do we avoid snakes or prepare for possible snake encounters?

Rattlesnakes are most active in the evening – they tend to hunt at night. They are also very active in the early spring, after being inactive through the winter months, so it’s best not to walk the dog after dark, even with flashlights.  I can’t tell you how many times I see people walking their dogs at night with flashlights.  I just want to pull over and tell them of the risk they are taking!

Don’t walk the dog in grassy areas or lots of vegetation and brush. That’s where the snakes may hide and are not visible.  Snakes also like to hide among piles of rocks or wood.  After a cooler evening, snakes might be seen sunning themselves on the warm pavement the following day.

The key is to be vigilant about observing your surroundings. Using your eyes, sweep the area you are walking, side to side and ahead, to spot potential snake threats.  I’ve seen snakes relaxing under a shade tree while walking a dog.  They can easily blend in with their surroundings, so observation is key.  Also, when walking your dog, keep to a defined pathway or road, not allowing dogs to investigate the sidelines, which is difficult since dogs love to sniff everything!

If you hear a rattle, stop and carefully try to locate the snake. Then slowly move yourself and your dog in the opposite direction.   Even if you see a snake on the road and think it is dead, never touch it or allow your dog to go near it.  Dead snakes can still bite through reflex.

Always make sure your dog is on a leash.  Often times dogs are bitten when they are off leash or on a very long retractable-leash whereby the owner can’t react quickly enough to a snake sighting.  I know a pet owner whose dog was bitten when it ran to the end of the driveway excited for the upcoming walk, unexpectedly encountering a frightened snake.  Put leashes on dogs before leaving the house.  In addition to safely walking your dog, front yards and backyards should be snake proofed.  Have solid block walls and clean up piles of rocks and wood.  If you have gates, it is smart to shore up the bottom of these access points.

If you’ve taken all the preventative measures and think your dog has been bitten, take them immediately to the emergency vet. Each year, hundreds of dogs and cats living in the Tucson area are bitten by rattlesnakes. Most victims that are treated at a veterinary hospital survive the bite, but some suffer permanent tissue damage and even die.

The following signs may indicate a bite:

Keep them as inactive as possible until you get to the vet. Carry them if you are able to do so.  If possible, contact the vet and let them know you are on the way with an animal with a snake bite.   This allows the vet to prepare the anti-venom so it may be administered immediately upon arrival.  While walking your dogs is so important to their health and happiness, as well as your own, it makes sense to be prepared.  If you know what to look for, what to avoid, and how to react if encountering a snake, you and your dog will have a more pleasant walking experience!!

View a local Firefighter removing a rattlesnake from our driveway: